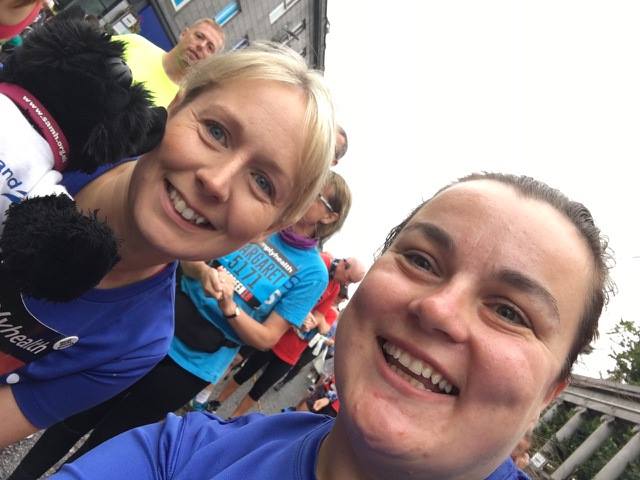 We are sad to be saying goodbye this week to two members of the jogscotland team, Laura Kirkland and Andrea Gavin.

The pair joined us in November 2017 as Communities Project Coordinator and Participation Coordinator, both working to help establish new jogscotland groups in communities that lacked them. Highlights of that project included three new groups starting on one day in April 2018,  and the establishment of a jogging group at Perth Prison, which provided a focus and much-needed activity for prisoners. That project ran until June 2018 and was followed by a successful bid for funding from the Changing Lives fund, enabling us to set up our Community Strides project with partners SAMH, which ran through until January 2021, with Laura and Andrea at the helm. 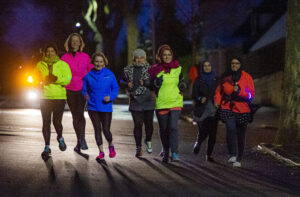 Community Strides aimed to focus specifically on helping more members of some of Scotland’s BME (black and minority ethnic) communities to experience the joy of jogscotland. Among the success stories of the project have been groups established at Dundee International Women’s Centre and at Saheliya, a charity for black, minority ethnic, asylum seeker, refugee and migrant women and girls. The latter won the Active Scotland Community Sport Champion award at the Scottish Women in Sport awards 2020, and the Community Strides project as a whole contributed to jogscotland winning the Innovation in Sport Award at the same awards in 2019. 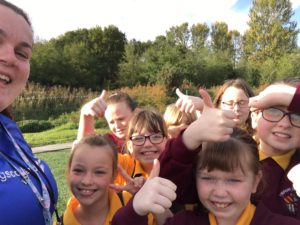 Andrea with the girls of Firpark Primary

Andrea also carried out the Jogability project, after a successful funding bid to sportscotland’s Women and Girls Fund, creating opportunities for girls and young women with additional support needs to get active.

Laura said: “I would like to say how much I have enjoyed the last three years working for jogscotland and SAMH. It has been amazing to work with so many individuals and groups from such diverse cultures and backgrounds, each with their own barriers and personal challenges that hopefully the jogscotland projects have helped them to overcome. To be part of that, doing something I enjoy so much myself has been very rewarding. I would like to thank all the members that have participated in the various projects, without your efforts my role as community strides co-ordinator would have been far more difficult.

“I would also like to thank everyone at jogscotland and scottishathletics for the support given throughout my time here. In particular I would like to mention Jo Stevens, a great mentor and boss. I wish everyone in the jogscotland family all the very best for the future and look forward to seeing us all return to some form of normality in our lives and getting our groups back out running.”

Andrea added: “I’m so incredibly lucky to have done what I passionately believe in for a job. The folk I’ve met throughout my three years here have been amazing. I’ve seen growth in both myself as a person and the jogscotland network- we’ve worked to include as many folk as possible in an activity that we love and help break the stigma that surrounds mental health. Thank you to the jogscotland network for all the have done.” 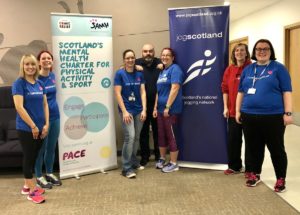 At the jog leader conference in 2018

In addition to working on their projects, Laura and Andrea have also between them contributed a huge amount to the wider work of jogscotland and scottishathletics, helping at the Jog Leader conference, welcoming runners to the jogscotland start areas at Great Run events, leading Active Girls Day, providing maternity cover, and numerous other contributions. They also work as tutors on the Leadership in Running Fitness course for new jog leaders, and Andrea is a keen athletics official – roles which we know they both look forward to continuing.

Head of Development Colin Hutchison said: “On behalf of scottishathletics and jogscotland I would like to thank Andrea and Laura for the outstanding contribution they have made over the past three years. They have brought a huge amount of enthusiasm to the organisation and their passion for jogscotland has helped expand our reach into new communities across the country. The outcomes from the projects they have led will help inform future strategy for jogscotland playing a pivotal part in improving health and wellbeing for members. We wish them both all the best in their future endeavours.” 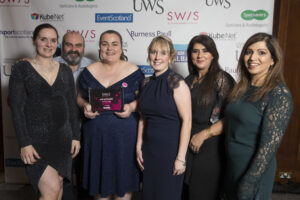 At the SWiS Awards: Jo, Andrea and Laura from jogscotland, with Robert from SAMH and Fatima & Vaqar from Dundee International Women’s Centre. Photo: Jeff Holmes