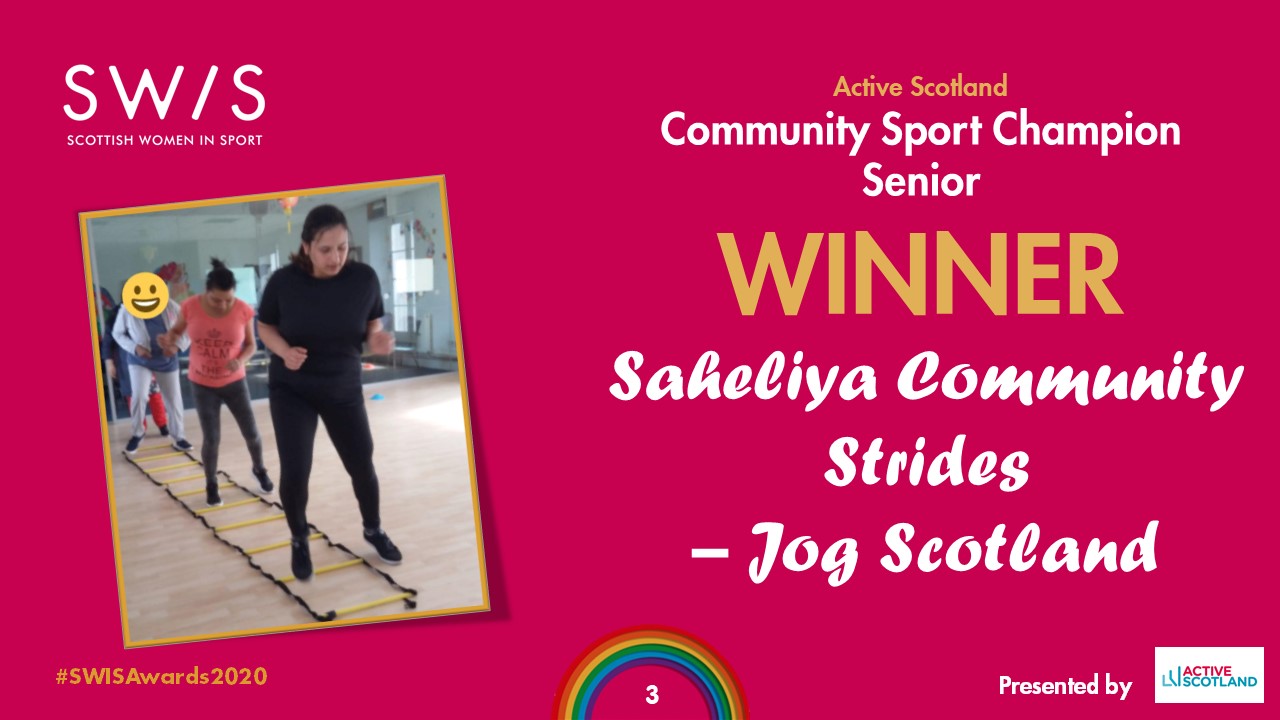 We’re delighted that our Saheliya Community Strides project has been recognised at this evening’s Scottish Women in Sport awards.

The project won the Active Scotland – Community Sport Champion – Senior award for its work to help women from diverse communities in Edinburgh benefit from being active. Project lead Andrea Gavin took the group online during lockdown, with a focus on mental, as well as physical, wellbeing. The group was part of the wider jogscotland Community Strides project, supported by the Changing Lives Fund, and was run in partnership with Saheliya, a specialist mental health and wellbeing support organisation for black, minority ethnic, asylum seeker, refugee and migrant women and girls.

When you find a gif of one of the new drills @Saheliya Wonderful Wednesday Women @jogscotland session! Thanks for your energy today, was great to see you all. Looking forward to next week already! #ChangingLivesThroughSport pic.twitter.com/BiQzqvDRxt

It was one of four winners from the world of athletics and running at tonight’s awards.

Laura’s victory comes in a year which has seen saw her leading the world rankings for 1500m, winning all three of her 1500m races in sub four-minute times. Last month she was named joint winner of our own 4J Studios Performer of the Year award.

Kayleigh has also had an extraordinary year, setting a new 200m World Record in the RaceRunning2 classification. She clocked 37.75 on 30 August at the 4J Studios National Open Series in East Lothian. The achievement means she has now broken World Records at 100m, 200m, 400m and 800m.

Meanwhile, the 4J Studios Virtual SUPERteams event won in the UWS Media Academy Innovation category, which recognises the best and most innovative approaches from governing bodies during lockdown to promote the development of girls’ and women’s sport. Over four separate virtual events, young athletes could compete both as individuals and representing their club, with a particularly high participation from girls.

As well as our four winners at the awards, we were delighted to also see four other shortlisted nominees from our sport, showing the strength and breadth of women’s athletics and running in Scotland across the board. They were: Nancy Davidson nominated for Frame Excellence in Communication award; Nicola Moriarty, nominated for Tru Wealth Volunteer of the year; Nasreen Choudhry – jogscotland TaySmilers – nominated for Most compassionate Role Model of the Year; Annan & District AC nominated for The Royal Navy – Community Sport Champion – Junior.

As well as celebrating the awards winners, the event featured conversations with Boston Marathon pioneer Kathrine Switzer and with the first female President of Cricket Scotland, Sue Robertson.

You can watch the awards here: