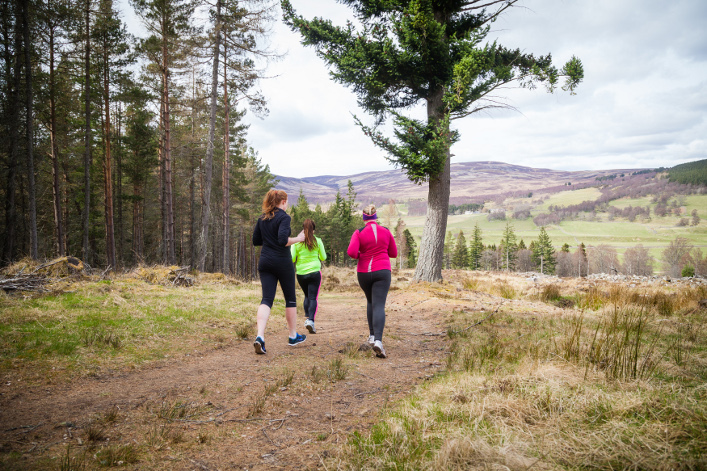 The jogscotland Challenge Series 2016 got underway at the weekend with the Run Balmoral Wee Trail Race taking place beneath blue skies. The stunning three mile course through the royal estate is designed to be ideal for those wanting a first attempt at trail running, as well as posing a challenge for more experienced runners wanting a short off-road race.

jogscotland groups including Aboyne, Alness and Hazlehead were represented at Sunday’s challenge. It was a particularly special day for the Hazlehead runners (pictured) – member Ronnie Gill was taking part in his first ever race, so he ran with wife Lisa, her sister Wenda Christie and fellow Hazlehead member Mark Milne, the four crossing the line together in 47:25/26.

At the front of the pack, it was a great event for the women, with first and second places both taken by female runners. Teenager Anisha Badial (Aberdeen AAC) set a course record of 20min 48secs. The Scottish under-17 trail running champion said: “I really enjoyed it but the hills were tough. I’m happy to win and now I’m going to concentrate on the Scottish hill running series.” Nicolle Beattie was second in 22:50 and third-placed Simon Smith was first man in 23:26, 20 secs ahead of Stephen Bond.

The Wee Trail was part of a whole weekend of events at Run Balmoral, which saw more than 5000 runners taking part in eight different races.

The jogscotland Challenge Series is a selection of events across the country, specially chosen to be particularly welcoming for those who are not running competitively – check out the other events in the Series – we’ll see you at the start line!