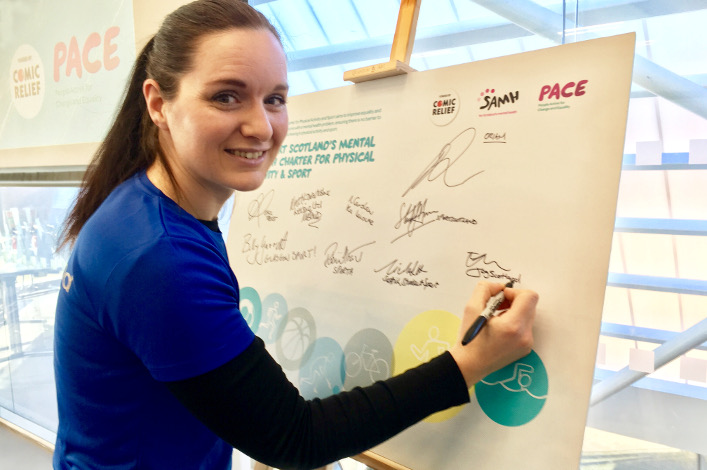 We’ve done it! We’re now full signatories of the SAMH Mental Health Charter for Physical Activity and Sport. In February, when the charter was launched, we were delighted to be among the first to sign up, pledging to further our work to promote good mental health. We have now submitted to SAMH our action plan under the charter, which lays out the specific actions we’ll take to promote, educate and raise awareness of mental health, and makes us full signatories.

jogscotland membership development officer Jo Stevens (pictured), who has worked closely with SAMH on the action plan, said: “The submission of our plan comes just over a year after we announced our official partnership with SAMH, and it’s brilliant to have this plan in place to build on our work together so far.

“We’ve already made a great start on many of the pledges in our action plan, and the support from both Jog Leaders and joggers for initiatives like Sammy’s Road Trip has been phenomenal. We’re really looking forward to getting to work on the rest of our pledges and to supporting the mental wellbeing of jogscotland members as well as their physical health.”

SAMH Head of Physical Activity and Sport Robert Nesbitt said: “At SAMH we know the positive impact that physical activity through sport or recreation can have on mental health and wellbeing.

“It’s great to see jogscotland submitting their action plan and becoming full signatories to the Charter for Sport; playing a role in using the collective power of physical activity and sport to create positive lasting change in mental health and wellbeing amongst their members.”