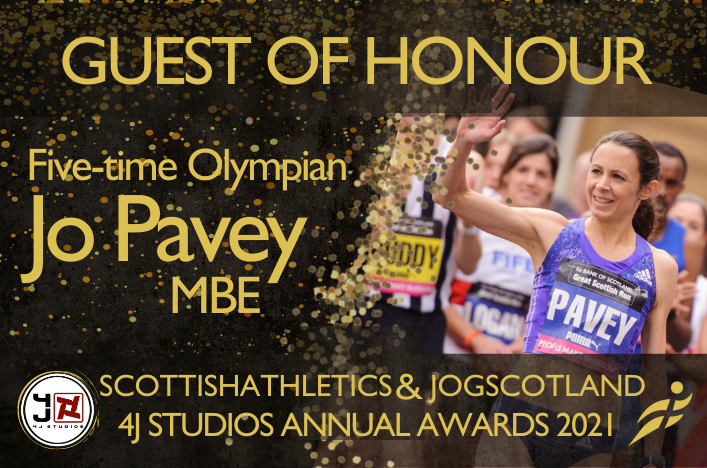 Five-time Olympian Jo Pavey, MBE will be our Guest of Honour at the 4J Annual Awards next month.

We’re delighted to be staging a physical event Dinner at the Hilton Hotel in Glasgow on Saturday 9 October. It’s important the scottishathletics and jogscotland community celebrate, recognise and acknowledge success and participation in our sport and we look forward to presenting the 4J Annual Awards.

And Jo is thrilled to be joining us, with the Exeter Harriers AC athlete commanding vast and varied experience across athletics after many years in the sport. Her Olympic appearance record stretched from Sydney in 2000 to Rio in 2016 and three more Games in between! Jo is also a European Champion at 5000m and a World Champs medallist on the track as well as featuring strongly in cross country and road running in a lengthy and varied career.

Jo is also a big fan of jogscotland and supports our Mums on the Run project. She said: “I am so thrilled to be invited to this year’s 4J Annual Awards Dinner, and I am delighted that the Awards will celebrate the important and fantastic work of jogscotland. The programme has provided the opportunity for so many people to enjoy the benefits of running and getting active whatever their ability or level of experience.”

“Running can have such a positive impact on both physical and mental wellbeing and jogscotland has done a brilliant job of helping people improve fitness levels in a sociable and supportive environment.

‘It’s been very exciting to see the growth of jogscotland and I wish to congratulate everyone involved in this great success story. I am certain that, on the night, we will hear more amazing stories around our jogscotland groups and leaders.”

Shortlists for the jogscotland awards will be announced soon, and the 4J Studios Annual Awards celebrate both jogscotland and scottishathletics achievement, offering our guests the chance to rub shoulders with some of the cream of Scottish athletics talent, in a year that has seen superb achievements, particularly at Olympic and Paralympic level. Jo said: “The success of the athletes in Scotland is absolutely phenomenal – we’ve all been thrilled to watch them excelling on the world stage.

“The strength and depth of the talent in the country is admirable and as a small nation Scotland has been punching above its weight to great effect. It’s also really important to celebrate the fantastic work members of the athletes support networks have carried out to help the athletes gain such great results.

“These are the people who support athletes throughout their careers. Without their support, it would be impossible for athletes to achieve their goals.  The selfless hard work they put in forms the backbone of our sport enabling athletes to train and compete and enjoy their athletics.”

Tickets for the 4J Annual Awards are now on sale. These are priced at £45 per person or £340 per table of eight guests.

In co-operation with staff at the Hilton, we plan to cap the overall number of guests (lower than the limit allowed by Scottish Government and the venue) and will seek to ensure there is plenty of space for moving around as we remain mindful of Covid-19 concerns.

Evidence of a negative lateral flow test will be required upon arrival as a further safeguard measure. There is a document on the page linked above, with further information.