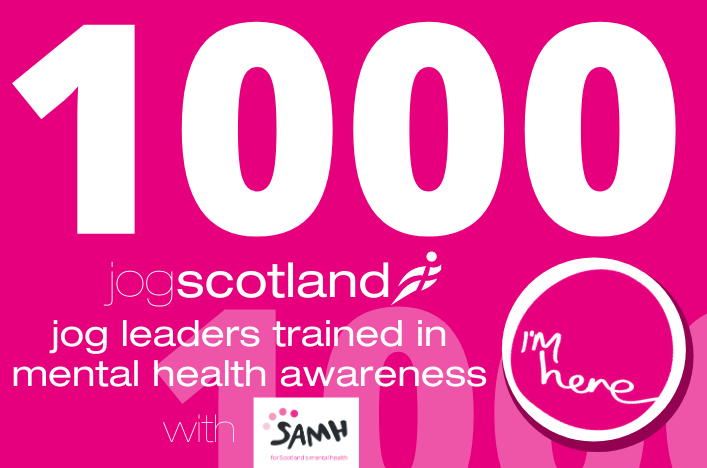 We are proud to announce that more than 1,000 jogscotland jog leaders have now been trained in mental health awareness with our partners SAMH (Scottish Association for Mental Health). It’s a major milestone for jogscotland, made possible by all the jog leaders who have taken time to complete the online course and develop new skills to support their joggers’ wellbeing.

We know that many of our leaders provide a listening ear to their members, and while we don’t expect them to become counsellors, we wanted to make sure they felt equipped to cope, and to help others find the support they need. We first made the course available shortly after launching our partnership with SAMH in 2017, making it a key goal when we signed the charity’s Mental Health Charter for Physical Activity and Sport. In 2019 we went a step further and introduced the I’m here badge, which jog leaders receive on completing the course. They are encouraged to wear it when leading and explain to their groups that the badge shows they’re happy to talk about mental wellbeing – whether that’s letting off steam after a tough day, or chatting about a long term mental health condition. 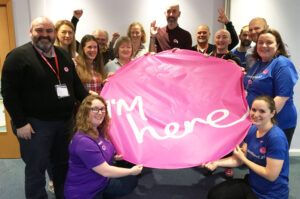 The launch of the I’m here campaign

We kicked off the I’m here movement with 140 leaders who had completed the training, receiving the badge and making pledges at their groups to support mental health conversations. Since then, the numbers have continued to grow, and everyone who now trains as a jog leader is invited to take the course when they complete the Leader in Running Fitness (LiRF) qualification. Even covid couldn’t stop the movement, with the LiRF course transitioning to blended learning, and all of the 220 leaders trained during 2020 being invited to complete the Mental Health Awareness training. The number of jog leaders who have completed the course now stands at 1018.

jogscotland development officer Jo Stevens said: “We’re so happy to go through the 1000 mark – it’s an amazing number of jog leaders who have taken the time to develop their mental health awareness. When we launched the training module, we already knew our jog leaders were dedicated, but they’ve exceeded our expectations in how keen they’ve been to support their joggers’ mental wellbeing as well as their physical fitness. 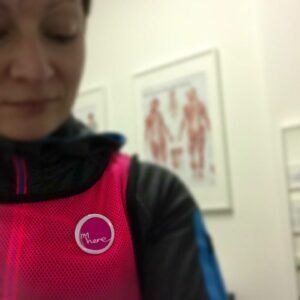 “It feels like there’s been a real sea change in the past few years – mental health conversations are now the norm at many of our groups, which helps to break down fear and stigma, and encourages people to seek support when they need it. Letting people know that we all have mental health – sometimes  good, sometimes bad – and that it’s OK to talk about it, has strengthened our community.

“We’d certainly encourage other organisations to help their staff and volunteers learn skills to support each others’ mental health – it makes so much difference to individuals’ lives and to the strength of jogscotland as a whole.”

SAMH physical activity and sport lead, Robert Nesbitt added: “It’s great to see so many jogscotland jog leaders complete their mental health awareness training. When jogscotland signed the Mental Health Charter for Physical Activity and Sport, they listed this training as one of their goals, and they’ve followed through to create real change for their leaders and joggers.

“The enthusiasm the jog leaders have shown demonstrates that most people are happy to talk about mental wellbeing, and just need a little guidance and confidence to make those conversations part of everyday life. We’re grateful to all the jog leaders who have taken the course and are setting a great example to their joggers.”

How can jogscotland help your mental health? Check out these inspiring stories…

Craig Lowrie of Galashiels used running to help him with the grief of losing his sister Donna in a road accident, and found valuable support from his jogscotland group, The Galavanters. Read more…

Jog Leader Jess Parson of Inverurie uses her Mums on the Run group to support maternal mental health – her own and others’. Read more…