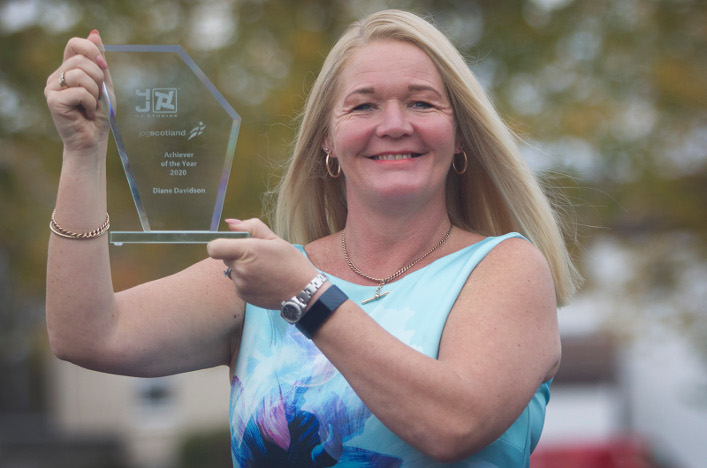 Pictured: jogscotland Achiever of the Year 2020 – Diane Davidson of Jed Joggers. Picture: With thanks to Bill McBurnie

We are delighted to open nominations for this year’s 4J Studios jogscotland Annual Awards. This is your chance to recognise the efforts and achievements of your jogscotland pals, from new joggers to experienced jog leaders, and everyone in between. If you know someone who has gone above and beyond to improve their own, or other people’s, lives through jogscotland, we want to hear about them!

We have a three week window for nominations, closing at midnight on Sunday 15 August 2021, so don’t delay, get your nominations in now! You’ll find the link to the nomination form at the end of this page.

Last year’s awards ceremony took place online – if you want some inspiration for your own nominations, you can watch the jogscotland highlights!

We are currently exploring the options for this year’s ceremony and will let you know as soon as arrangements are confirmed. But however we celebrate, the one thing that’s sure is that we will celebrate, so we need your nominations!

Nominations can be made in four categories. They may refer to achievements throughout the year since our last nominations closed on 2 August 2020, including virtual jogscotland activities during periods of lockdown. For all nominations please include up to 500 words, and be as comprehensive as possible to help the judging panel with their decision.

Achiever of the Year

You may nominate anyone who is a current jogscotland member. A fellow group member, jog leader, family member or friend can make a nomination for the Achiever of the Year Award. The nominee might be someone who has overcome great odds to get active, who is inspiring others, or has achieved more than they ever thought possible on their running journey.

You may nominate anyone who is a current jogscotland jog leader. A group member, fellow jog leader, family member or friend can make a nomination for the Jog Leader of the Year Award. The nominee could be, for example, someone who has been a great inspiration to their joggers for many years, someone who has excelled at bringing their group together in lockdown through virtual activities and keeping in touch online, or someone who has overcome particular challenges to lead their group.

This is open to both jogscotland community groups and workplace groups. You must nominate your own group and tell us why you think your group should receive the award. Please include the history of the group, statistics on numbers taking part, stories about the jog leaders and jogscotland members, health improvement achievements, and anything else you’re proud that your group has achieved.

For someone who has used jogging to improve their own or others’ mental wellbeing. This could be, for example, running a project that specifically addresses physical activity and mental wellbeing; overcoming their own mental health challenges to get active with jogscotland; creating a group that supports wellbeing conversations and is welcoming to those facing mental health issues. Nominees can be an individual member, a jog leader, or a jog group.