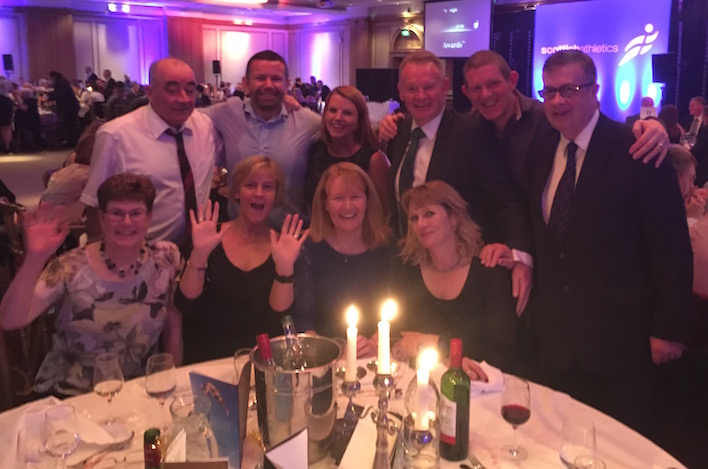 Pictured: JogScotland Haddington, with Leader of the Year Neil Scott (back row, third from right)

The jogscotland Award Winners 2016 were announced at the Hilton Hotel in Glasgow last night. The three awards were presented as part of the scottishathletics awards, in front of a packed ballroom of around 400 people – including Olympians, Paralympians, and special guest Derek Redmond.

Huge congratulations to all our winners, who exemplify the best of jogscotland. Congratulations also to our other shortlisted nominees – all your stories moved and inspired us!

WORLD MENOPAUSE DAY – LET’S TALK: It’s World Menopause Day and we want to talk about running through perimenopause and menopause, so we asked some of our jog leaders to share their experiences.Jane Malcolm of jogscotland Penicuik says: “Running through the menopause brings a different challenge every day, managing internal heat, sore joints, tiredness BUT running helps me with all of the symptoms of peri-menopause. It can be really exhausting but it is normal, we all go through it, sharing our experiences is liberating, to know you are not alone really helps.”Many jog leaders found that staying active helped with the physical and mental challenges that menopause can bring. For some, their running changed or was put on pause and other activities came to the fore. Everyone agreed that learning as much as you can about perimenopause and menopause, and chatting to others with experience of it - including those at jogging groups - were hugely helpful. So let’s talk!The Scottish Government has a new online resource to help you start learning about menopause, whether you’re looking ahead, experiencing it now, or supporting friends, family or joggers who are experiencing it: nhsinform.scot/menopause ...