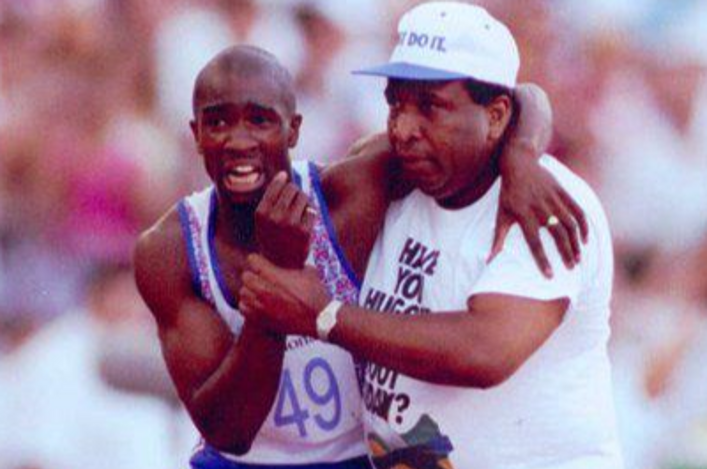 British sprint legend Derek Redmond will be Guest of Honour at the scottishathletics and jogscotland Annual Awards later this year.

It promises to be one of the highlights of the calendar, bringing together everyone from the jogscotland Achiever of the Year nominees to this year’s Olympians and Paralympians.

The Hilton Hotel in Glasgow will again be the venue for the event, with the date for diaries being Saturday 29 October.

Nominations for jogscotland Achiever of the Year, Leader of the Year and Group of the Year will open on 1 August, when tickets will also go on sale – so put your thinking caps on and if you know a someone deserving recognition, get ready to nominate!

Redmond won gold with GB’s 4 x 400m team at the World Champs and European Champs but is perhaps best remembered for limping around the track to ensure he crossed the finish line in Barcelona with his father, Jim, after suffering a serious hamstring tear during the 400m semi-final at the 1992 Olympics.

The finish made him a great example of determination in the face of sporting challenges, and we feel he’s sure to inspire jogscotland members – here you can check out the footage of the race…

Derek enjoyed a long and successful athletics career during the 1980s and 1990s which saw him break the British 400m record twice and challenge American dominance of the event.

He was a prominent member of the British 4 x 400 metre relay squad that took gold at the 1991 World Championships and the 1986 European Championships.

The Barcelona incident was voted the third greatest Olympic moment in history in a poll of viewers of the US broadcaster NBC. Unfortunately, the injury sustained that day was worse than first thought and, after seven operations in under two years, he was forced to retire.

Derek said: ‘I am delighted to be coming to the scottishathletics and jogscotland Annual Dinner in October as Guest of Honour and it promises to be a fantastic occasion’

Basic information on the Annual Awards Dinner is already listed on our Events page.