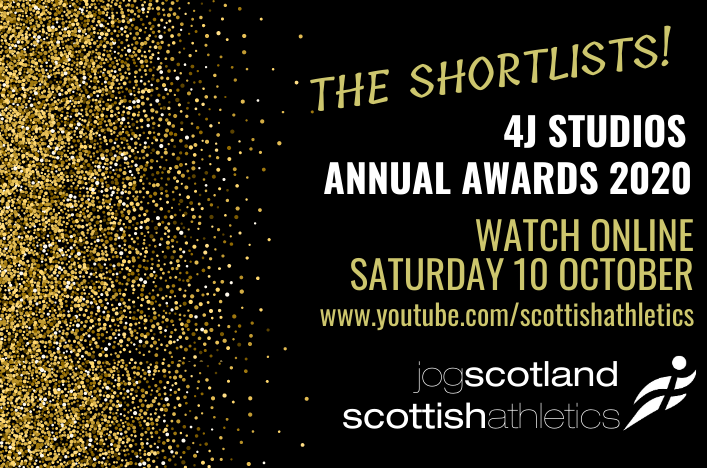 We are delighted to announce the shortlists for the 4J Studios jogscotland Awards 2020!

It has been a year like no other, when achievements were virtual, friendships were digital, and uncertainty was everywhere. But despite it all, the jogscotland community has grown stronger than ever. Jog leaders came up with challenges to be done during daily exercise, we shared selfies and supported one another at a distance of 2m or more.

We’re thrilled to be able to celebrate just some of the people who have made sure that this year will be remembered for good reasons as well as bad, the folk who went out of their way to stay active, keep others active, and to help take care of the physical and mental wellbeing of Scotland.

The Annual Awards will be a little different year – rather than gathering in person we’ll be online, with a broadcast planned for 10 October on the scottishathletics YouTube channel. That doesn’t mean you can’t get your glad rags out! Get dressed up, organise your watch parties, and we’ll see you there!

The winners will be announced as part of the 4J Studios scottishathletics and jogscotland Annual Awards, and we’re grateful to sponsors 4J Studios, who are continuing to support the event as it moves online.

Find out more about the stories behind each of our nominees….

Diane Davidson – Jed Joggers
Diane joined Jed Joggers on its first night, initially unsure of her ability – but that soon changed. Running with Ben Smith on his 401 Challenge boosted her confidence so much that she took on Jed Ultra. Since then she has achieved a silver medal in GB Ultra Manchester to Liverpool, completed a 24 hour track event for charity, covering 82 miles, and cross trains for triathlon events.
But she has never forgotten her roots, supports fellow group members, and is working with local schools to encourage young people to get out and running. During lockdown she took on multiple challenges including a virtual Lands End to John O’Groats where she was first female finisher. She is praised as “truly dedicated and inspiring to all”.

Yvonne Robertson – jogscotland Hazlehead
At 72, Yvonne is an amazingly active senior citizen, who cares for others and nurtures everyone, while keeping a razor sharp wit. She’s encouraged new runners to the group and is an enthusiastic parkrun volunteer.
Yvonne’s love of running fell by the wayside as she raised her family, but restarted in earnest five years ago, after she was diagnosed with breast cancer – it had been on her wishlist for a long time and seemed a good way to keep herself fit during her treatment and recovery.
Her lockdown runs have included a 4.30am beach run to watch the sunrise, and participating in virtual challenges to keep in touch with her fellow group members. She says “When I run, I don’t feel 72, I just feel great, and really enjoy the company I run with.”

Vicky Sharples –  Newton Stewart Striders
Vicky is new to running, having followed the jogscotland Learn to Run programmes from scratch during lockdown. She can now complete a non-stop 5K – in fact she’s running three of them a week, hitting 60K in a month and inspiring others in her group. During lockdown she helped to think up more than 10 different virtual challenges for the group to participate in, keeping others active while they couldn’t meet in person.

Alan Falconer and Suzanne Mattison – Inverness jogscotland
Alan and Suzanne have always been encouraging and supportive jog leaders, but really excelled during lockdown. Alan set countless challenges to keep members active and enthusiastic, from running bingo to supermarket sweep (running past supermarkets – not clearing out the shelves!). Meanwhile, Suzanne logged every single mile that was run by members in spreadsheets, a huge task as she calculated group totals: They ran more than 25,000 miles – right around the world. Alan and Suzanne’s constant encouragement meant that members not only endured lockdown, but thrived – many improved their running, became more confident at running solo, and explored their home city to a whole new degree.
They have also kept an eye out for anyone who was struggling, offering a listening ear and keeping in touch with members so that nobody felt isolated or alone.

Fran McCulloch (Murray) – East Dunbartonshire Leisure
Fran leads three groups, meeting weekly at leisure centres across East Dunbartonshire. She always looks out for the mental wellbeing of joggers as well as their physical fitness, keeping in touch with members when they aren’t able to run and encouraging them to get involved with parkrun volunteering. She has completed four marathons to raise awareness of the importance of blood donation, and as a result many of her runners have become donors themselves. She has also encouraged her groups to support several community charities. She kept runners motivated throughout lockdown with weekly challenges that were fun, family friendly, and competitive.
She has taught her group that they are capable of far more than they thought, with endless patience for her runners.

Paul Wilson – Charter International Run Crew
Paul has been the jog leader of The Charter International Run Crew since it started, welcoming everyone from the surrounding areas of Glasgow, including newly-arrived locals, some of whom are going through the refugee or asylum process. Paul organised a kit amnesty with his local parkrun at Springburn so that group members could have comfortable kit to run in even if they couldn’t afford to buy it themselves. He supports members to connect to their community to reduce isolation, and encourages them to chat about their mental health. During lockdown he made sure those who didn’t have English as a first language understood that they were allowed to exercise daily. He is incredibly encouraging to his joggers.

Invergordon Morning Movers
This group provides support to mums week in, week out, but really came into its own in February when members discovered while out running together, that one of the town’s primary schools was on fire. The teamwork and camaraderie kicked in immediately, members jogging without children taking charge of the running buggies belonging to those who had children at the school, as they raced off to check on them. Fortunately nobody was injured, but the trauma of that event was made more bearable by the mutual support of the group, both on the day and in the weeks that followed.
It was just an extension of the sense of community and mutual support that the group offers to members week in, week out. This year, they have stayed in touch and supported one another with weekly lockdown games.

Jiggly Joggers
Jiggly Joggers was founded in 2018 in the East End of Glasgow, to provide an inclusive, non-judgmental group for plus-sized women with little or no running experience. In three years, the group has grown from 10 to 130 members. The majority had not run before but many have now completed their first half marathon.
During lockdown the group held socially-distant relays which raised thousands of pounds for local charities, arranged donations of food parcels to their local food bank, and gave boxes of treats to frontline key workers in local care homes.
Founder Elaine Leitch has received the Glasgow Lord Provost’s special recognition award, and the group has this year been awarded funding from Big Lottery to allow them to expand further.
It is described as life-changing and empowering – not just a jog group, it is a place to meet and connect with other women to find peer support on issues such as social isolation and mental health issues, to gain valuable experience through volunteering, and to grow in confidence and fitness.

On The Run Cumbernauld
Formed in 2016, On The Run Cumbernauld has steadily increased membership each year through word of mouth and social media, catering for beginners to advanced runners, across nine separate groups.
They started 2020 with phenomenal turnouts for the club, with more than 100 runners turning up. To help with the larger numbers, some regulars volunteered to give up their own jog to be a Jog Helper, buddying stragglers or showing the way to the front runners.
During lockdown, they used their Facebook group to keep in touch, organising a photo scavenger hunt, virtual relay, fortnightly zoom quiz and regular postings of the jogscotland running programmes.

Chloe Allen – Jog Dalgety Bay
Chloe joined Jog Dalgety Bay for company and to improve her fitness, and has shown such enthusiasm that she has gone on to become a jog leader. She has epilepsy but doesn’t let this stop her running with the group, uplifting and inspiring others. When jogscotland teamed up with the Scottish Association for Mental Health, Chloe led the effort to have jog leaders in the group trained in mental health awareness, and has herself trained to become a Mental Health First Aider.

Midlothian Pink Laydeez
As well as being a jogging group for women of all ages and fitness levels, the Pink Laydeez provides an important emotional support network for members. They spend a lot of their running sessions laughing and chatting about the good things in their lives, but also about problems and challenges they are facing. During lockdown they really missed the camaraderie of the group but instead of meeting in person were able to find support through some frank conversations about mental health on their private Facebook group.
The group also shared daily Zoom workouts, motivational challenges and the knowledge there would always be someone happy to chat on the phone if they needed it.

Mums on the Run Inverurie
Mums on the Run Inverurie has always provided support for new mums to return to exercise safely, and that didn’t change during lockdown. The group moved online and took with it a wonderful sense of community spirit, providing structure to dauntingly long weeks, with members sharing both goals and struggles through the times of lockdown.
Weekly online challenges were set, along with virtual social events like bingo and quiz nights. Leader Jess Parson encouraged self-care, engaging with the outdoors and mindfulness. A day-long virtual relay was organised to raise money for a local charity supporting maternal mental health.
More than a running group, it has maternal mental health at the forefront and makes a difference to all the mums who attend, physically, emotionally and socially.