Our 2015 award winners were announced on 31 October 2015 at the glitzy scottishathletics Annual Awards Dinner at the Hilton Hotel, Glasgow, with special guest Steve Cram. 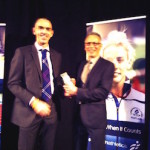 Mike attends Muir of Ord jogscotland twice a week and helps out at the Inverness group. The dedication, support, advice and encouragement he gives to all members is described as ‘first class’. Even when injured he will attend to support others.
Mike regularly wins his age group category in events but every week after finishing parkrun will go back to run with others from the group.
He has been a committee member since it first began, taking on every possible role, from social organiser to treasurer.
This year he embraced a new challenge, organising the group’s inaugural 5K challenge. As Race Director he oversaw every detail of the race with vision, drive and commitment. Not only did the event leave the whole village buzzing for weeks afterwards, it brought a number of new members to the group.
One of his nominators called him “a true inspiration to us all”. 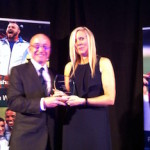 Rhona established Jog Moffat in February 2015 and coordinates a huge spread of activities for every age group.
In addition to adult groups, children’s sessions are held at Moffat Academy with support of Active Schools, with more than 70 children from P2 to P7 taking part and a waiting list to join.
Family sessions are also held, for family groups of any age and composition to get active together and take away ideas to use between sessions.
Rhona inspired so much interest from potential Jog Leaders for the group when it was started, that they were able to host their own Jog Leaders and Junior jogscotland courses in Moffat. She also works with Moffat nursery, primary and secondary, and Beattock primary, to help get pupils active.
Rhona is the driving force behind all this activity, constantly planning sessions, coordinating leaders and fundraising so that classes can remain free of charge. 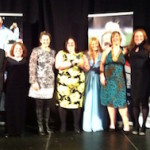 Started two years ago, jogscotland Hazlehead is a really welcoming and inclusive group, which always has a steady stream of beginners progressing up through its ranks.
Since the group was set up, the first beginners have progressed to entering their first marathon and becoming Jog Leaders themselves.
The group now has 18 leaders, with a typical night seeing 11 leaders supporting five or six groups and 40 to 50 joggers.
The group celebrates everyone’s achievements no matter what, from first 5k to marathon.
Its 250 members include Kristi Wellburn, who has lost nearly four stone and completed her first half marathon; Leader Shona Clarke, who recruits new members wherever she goes; and Tony Jones, who joined while in recovery from a heart attack aged 38, and this year completed several half marathons, improving his confidence and self-esteem as well as his health.
The group is praised as being “Fantastic, supportive and friendly.”

Here are the entries for the first week of the Great jogscotland Scavenger Hunt - look for something beginning with O on your daily exercise and send us a picture! ...

Share on FacebookShare on TwitterShare on Linked InShare by Email