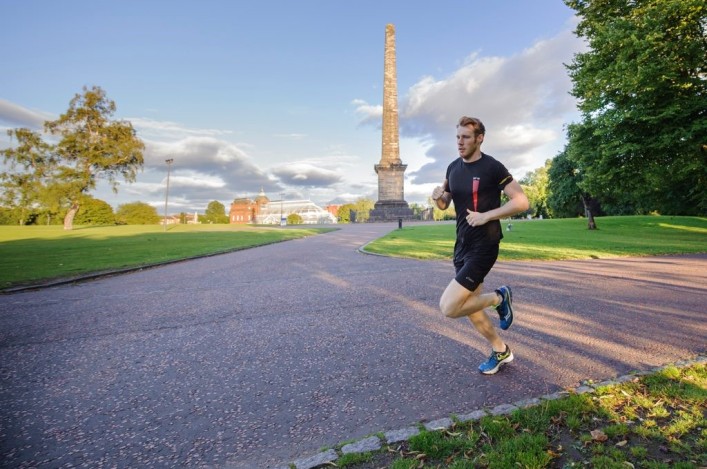 A pact to go from sofa to Great Scottish Run in about four months (made over more than a couple of beers) might not be everyone’s reason for running, but it was mine. I duly started attempting to walk-run a few nights a week while friends continually promised to come the next night (never happened). Sadly I overestimated my ability, ran off far too fast and knackered myself within a couple of minutes. Defeated.

Upon hearing my frustration, I was dragged along to a run with Glasgow FrontRunners – despite protests and general fear that I’d look like an unfit idiot who’d bitten off more than he could chew. While I was definitely not the best runner there, I wasn’t made to feel like it. Constant reassurance that ‘we were all beginners once’ felt like faint praise, however as I’ve progressed I’ve seen how true it is. I enjoyed it, it was invigorating, and after a couple of weeks I came to love running.

A typical self-employed workaholic, running became my escape from technology, a chance to explore places I’d never been before. It was an opportunity to get to know people better and share in the joy of new scenery and faster times. Yep, I became a runner – we are a special breed.

When the opportunity to be a Jog Leader came up, I jumped at it.  I had learned and gained so much from the people that supported me that I wanted to offer the same for other runners. Only a day after my Jog Leader training, I led my first run. I didn’t lose any group members, no one got injured and everyone seemed to enjoy themselves. It was great.

Since then I’ve gained a reputation as “the mean one” – virtually guaranteed to give our more advanced groups a hill or sprint session to vary their training, however I most enjoy working with our beginners group. The chance to help people who came into running in the same state as I did, and to see them improve, gain confidence, compete in races and eventually go onto Jog Lead themselves is incredibly rewarding, and something I’m proud to be a part of.

While it may initially seem like a big undertaking, the continual support from jogscotland and other Jog Leaders to continually improve and update skills – as well as getting fresh ideas for club sessions, is incredibly beneficial and ensures that our running club is constantly challenging and enjoyable while attracting and retaining new members.